This article written by Nick Croyle appeared in the March / April 2012 #216 issue of the Fouling Shot. 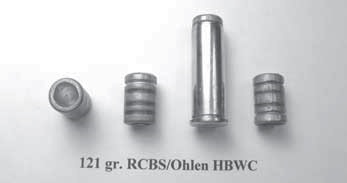 In a trade with Ed Harris, I wound up with an unusual mold by Erik Ohlen (www.hollowpointmold.com). Its an extractor bar hollow base conversion of an RCBS double-cavity, 142 gr. DEWC for the .38 Special. With Eriks extractor bar conversion, using it requires only a second or so more time than a normal double-cavity mold. Thats because after cutting the sprue, its more convenient to rotate the mold 180 degrees and then release the bullets, so they fall downward from the hollow base inserts.

Although it may well make a fine plinking bullet when cast really soft, that wasnt what I had in mind. I commonlyrun a BHN 10 from the RCBS bottom-pour and I have dead soft lead in one 10-pound Lee bottom pour with linotype in another Lee. I wanted to avoid fooling with a fourth alloy. What I wanted to determine was whether I could drive the bullet at 850  950 fps with decent accuracy from my .357s and my .38 Special S&W Model 342 Airlight.

In the .357 Magnum revolvers (S&W 3 Model 60, 5 Model 627-5 and 6 Model 686+) the bullet seems to be a bit picky about powder charges and its point of impact is much lower than my other usual loads. Thats not too unexpected considering its 121 grain weight. However, it is a gem in the S&W 342.
To determine a load, I looked at .38 Special +P loads in the Hodgdon on-line loading data and discovered a maximum load of 4.6 grains of Titegroup with the Hornady 140 grain XTP-JHP. I loaded the little RCBS/Ohlen with 5 each of 4.0 grains, 4.25 grains and 4.5 grains in once-fired Remington +P cases and went to the range.

The 4.5 grains of Titegroup delivered 956 fps from the nominal 2 barrel, did not lead and shot as well as anything else I have tried in it, including NEI #152 RNFPPB at 800 fps. It had significantly less recoil than the NEI load and more muzzle energy. Cases ejected easily.

I loaded 25 more and the following week returned, along with Remington factory 125 Golden Saber and 110 JHP loads to check points of impact. For all practical purposes, they were identical at 15 yards and close enough at 25 yards to stay in the nasty zone of an E-Silhouette target.

Since the owner of the range had some wet newsprint in his boxes, I did some testing. From 7 yards I fired a round and it penetrated 7 inches. His experiences on African game have led him to conclude that penetration in wet newsprint is just about half what occurs in flesh. In addition to other examples, this experience is based upon 17 African Cape Buffalo and 20 Australian Asiatic buffalo. Ill take his word for it.

This experience has also shed some light on the question of How hard is hard? Well, at what has to be right at the SAAMI limit of 20,000 p.s.i. for .38 Special +P ammunition, the skirts on the little bullet dont blow and the recovered slug in the accompanying photograph still goes 121 grains. So at only 950 fps, BHN 10 is hard.